Despite still being in the early stages of her career, Claudine Adeyemi of Mischon De Reya is a well-known and influential figure in the worlds of law and social mobility. Born and raised in South London and spending most of her childhood in a single-parent home before moving out at the age of 16, Claudine’s famed work ethic has earned her numerous plaudits and awards, including being Highly Commended in the ‘Rising Star of the Year’ category at the inaugural UK Social Mobility Awards. I spoke to Claudine to find out what motivates her, what she is up to at the moment and about her plans for the future.

‘One parent, one income, but we got by.’

‘I grew up in South London and my mum passed away when I was quite young – so it was me, my brother and my Dad. One parent, one income, but we got by.

‘In terms of education, the local schools operated a middle-school system and my Dad thought it was pointless to do a couple of years and then move on, so I applied to schools outside my borough which meant I had to take entrance exams. I got 100% in the exams and got into Graveney School, in Tooting.

‘Culturally, people with my background were encouraged to look at certain degrees. At first I wanted to be a doctor for no particular reason but watching Holby City and Casualty put me off so, at age 11, I switched to wanting to be a lawyer. Coming to that realisation was quite useful because it kept me focused after leaving home.

‘I left home when I was 16, after my GCSEs, and stayed in hostels and B&B’s during my A Levels. During my AS Level exams, I had to go to A&E because I’d got a bug from by B&B because it was so dirty. I had to deal with things like that and I wouldn’t have had those problems if I’d been able to stay at home.

‘I never wanted to be in a position where I hadn’t achieved what I knew I could.’

‘I had to be aware financially, make sure there was food in the fridge, and pay attention to my self-care. The disruptions were really tough. At one point I was in a house with around eight girls, none of whom were studying. My neighbour had parties all the time and I could have thought at any point: “Sod it, it’s too difficult to focus, I’d rather have fun.”

‘Being black, having to work twice as hard, having a sense of responsibility to not let your family down – I never wanted to be in a position where I hadn’t achieved what I knew I could. My personality, and maybe it’s subconscious, is such that when I have something I want to achieve it’s difficult to let that go. I knew I wanted to make it as a lawyer. 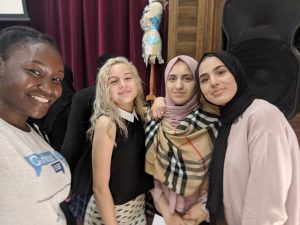 Claudine with some of the students benefiting from Student Development Co.

‘Where you start in life shouldn’t determine where you end up.’

‘My definition of social mobility is quite clear: “Where you start in life shouldn’t determine where you end up.” It isn’t just speaking to upward social mobility. That definition encompasses the whole concept.

‘One of the biggest barriers to social mobility is where you grow up geographically, particularly in social mobility cold spots like the North-West. Another barrier is young people not having the aspirations or confidence to fulfil their potential because they don’t have access to people who can give them guidance and advice. The Student Development Co. is a non-profit where we invite professionals in our network to come and talk to students.

‘The inspiration for it came from Young Black Graduates, which I was running with some friends. We had themed networking events to share opportunities – we were trying to cultivate a community and see what was possible in terms of career development.

‘One of the reasons I set up and launched Career Ear was so we could target people outside London.’

‘There was a lot of focus on entrepreneurialism. That was the buzz at the time. People had side hustles and were setting up businesses as young people. I wanted to focus on careers stuff – so that’s where Student Development Co. came from.

‘I do what I can along with my day job. When we’ve had opportunities to go outside London we go, but because I’m based in London and have attracted a lot of volunteers in London it has been focused there.

‘In fact, one of the reasons I set up and launched Career Ear was so we could target people outside London – it’s an easy way for people who aren’t in London to access professionals – that’s my way of getting to those places.

‘I hope it empowers them and gives them the confidence to explore that industry more and learn about opportunities.’ 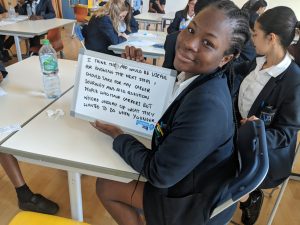 ‘Career Ear morphed from an initiative called Ask a Professional, where we took a different industry every month and found a professional to answer questions. It was a lot of work on my part to find people who could answer the very specific questions that were coming through.

‘It wouldn’t ever have had the impact I wanted it to have because, for example, if you had a question about an industry in the wrong month it wouldn’t get answered. Career Ear removed those restrictions from the process.

‘It’s a step in the direction of breaking down barriers. If you take a person in Burnley who doesn’t know any lawyers, they can pick up their phone and get answers to their specific question from like five lawyers. I hope it empowers them and gives them the confidence to explore that industry more and learn about opportunities.

‘All sorts of different tools are available online and initiatives being run. I want to shine a light on those initiatives so people know they have an outlet and platform to see all the things going on that can support you. One of the things I’ve found with young people and tools for jobs is that they haven’t come across the organisations providing them – they simply don’t know they are there.

‘I’ve had to schedule in down time, otherwise I just wouldn’t have it.’

‘I’m currently on a nine month sabbatical but I am keeping busy! We are releasing a brand new version of Career Ear with exciting new features next month (October). We want to make sure that every young person has access to Career Ear.

‘We are already starting to have conversations globally because it can work in other countries, so we are figuring out how we go about making sure that it works throughout the world. Also, we want to have an international lens and tap into globalisation.

‘I’m fortunate in terms of my firm – they are really supportive. I can leave early or come in late. They recognise that I do work hard and put in the hours – there’s an element of agile working. If it was a different firm it would be more difficult.

Another student happy with Career Ear

‘I have to be careful to avoid burn-out, though. I’ve had to schedule in down time, otherwise I just wouldn’t have it. In the same way I would block out time to prepare for a workshop, I block it out to watch TV.

‘I’ve started meditating with apps like Headspace, but also swimming. I’m not the most confident swimmer but it’s helpful because I have to be so focused on not drowning that I can’t think about anything else!

‘Lots of companies can do more to advance social mobility. In terms of representation and who gets hired, as juniors or laterally, you need an environment where people from disadvantaged backgrounds can thrive. Collect data – social mobility is the protected characteristic you can’t see.

‘You have to make sure people from less privileged backgrounds are involved in decision making. Are they represented in recruiting, interviewing people, internal decisions, and communications internally and externally, putting procedures in place? In professional services, is the environment that people are working in set up so those who don’t have the social or cultural capital to build a rapport with certain types of clients are supported?

‘When I went to my first client lunch by myself, my boss asked if I wanted to run through the wine list – it was so useful because I knew nothing about wine. Helping people to feel comfortable asking those questions is so important. Management need to be aware that they need to be supporting those kind of things.

‘Don’t just talk, do something about it. Are the things you are doing going to deliver the change that you are looking for? Challenge yourself and ask yourself the right questions.’

Claudine is an Associate in the Real Estate Dispute Resolution team at Mishcon De Reya. She specialises in a wide range of contentious issues relating to commercial and high value residential properties.

Claudine is a member of the Property Litigation Association and in 2015 was listed in Property Week’s “Top Forty Under 40.” She was also “Highly Commended” as Junior Lawyer of the Year in the Law Society Excellence Awards 2015 and recognised as a Rising Star in the We Are The City Awards 2016, Black British Business Awards 2016 (finalist) and The Powerlist 2017. In May 2018, Claudine was named number one in the EMpower Top 30 Ethnic Minority Future Leaders List presented by Financial Times, having ranked in the top 30 in the same list in 2017.

Claudine is the Founder of The Student Development Co. a non-profit organisation which provides career-related support for 16-24 year olds from less privileged backgrounds and has recently launched a mobile app, Career Ear. Claudine was a finalist in the National Diversity Awards 2016, was listed in the Digital Leaders’ DL100 List 2017 and was highly commended in the ‘rising star’ category at the UK Social Mobility Awards 2017. Claudine was also named in Brummell Magazine’s ‘One to Watch 2018’.

She is a mentor for the start-ups taking part in MDR LAB.

Keep up with her recently launched Vlog, ‘Millennial Girl in a Sabbatical World’, here.

The UK Social Mobility Awards are now closed for entries! 🏆🤩 A massive thank you to everyone who has entered - we have received so many great submissions that showcase the hard work that is being done in order to improve #socialmobility! Next stop ➡️ shortlisting! #SOMO2022 pic.twitter.com/6mX5JJ0F1Q

It is the last day to enter the #SOMO2022! 🏆⌛️ There’s still time to get your entries in for this year’s awards - the deadline is at 5pm today! We can’t wait to celebrate everyone doing great work to advance #socialmobility in the UK. Enter now ➡️ somo.uk

The deadline for the UK Social Mobility Awards 2022 is only 1 day away!! 🏆⏳ Get your submission in by 5pm on 24th June and join the network of organisations who are championing the advancement of #socialmobility in the UK! #SOMO2022 Enter here ➡️ somo.uk pic.twitter.com/SRU9XG6fKq

We are delighted to have @AmazonUK on board as our Gold Partner in this year's UK Social Mobility Awards. #SOMO2022 Check out what John Boumphrey, Amazon UK's Country Manager, has to say about #socialmobility within their organisation and this new partnership. 👇🏾 pic.twitter.com/Zp69zGITB5

Find out how to enter and more here ➡️ somo.uk